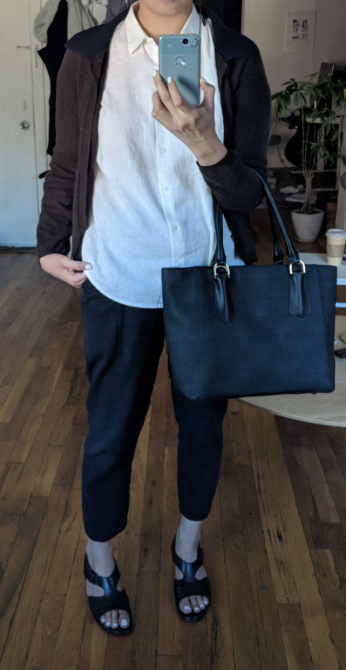 The weather has been really nice this week, allowing for sandals and light outerwear all week long.  What a treat!

I’m wearing my recently acquired Uniqlo linen shirt here again (2nd time in one week).  I love how light and easy it feels on.  And if you are paying attention to details, you might notice that I’m wearing new (pre-owned) shoes!  I bought a second pair of the SAS suntimer sandals that I already own in Navy.  They are such good work appropriate shoes for the summer that I decided to buy a second one in black.  I went for a half size larger than my old pair to get a little more room around the toes.  I found a pair that was practically new on PM for about $25 (retail $120).

Speaking of Poshmark.  I’ve had several things up for sale for probably over a year now that I haven’t been able to sell.  I was going to donate it all to Goodwill at some point.  But I’ve also read about how the bulk of Goodwill donations don’t ever get re-sold and most of it goes to recycling centers (at best).  But anyway today I decided to do something different with my Poshmark items.

I’ve been working with a young female patient who is homeless and has intellectual disability.  She was admitted to the hospital after a heroin overdose.  Her clothes must have been cut apart en route to the hospital to put IV lines in quickly.  She seems like a really sweet person and has been through a lot of hardship to say the least.  She asked me for underwear, shoes, and clothes because she literally has nothing.  I told her I’d ask the hospital social workers for charity clothes but it turns out the hospital clothing supply is low.  They have plenty of coats for the winter, but that’s about it.  Then I realized we were about the same size, and it occurred to me that I should just give her all the clothes in my Poshmark closet that I hadn’t been able to sell, along with a sports bra and some flip flops that I already own but never wear.  She could really use it and it would help me clear out some space too.  A win-win.

Most hospitals have a supply of donated clothes to give to patients who need them.  Often times these patients are homeless or very poor.  Sometimes they get admitted when the weather is nice and then sent home when the weather is freezing cold and need winter coats, socks, and boots on their way home.  A lot of times, patients’ clothes are destroyed in the emergency situation that led to their hospitalization.  They are commonly elderly, and might be alone, and have no nearby friends or family who can bring them clothes.  Charity clothes are handed directly to patients who have an immediate need for them by social workers who arrange their discharge from the hospital.

I thought I might share this with you guys in case you’re looking for good places to donate your stuff.  In addition to regular medical hospitals, psychiatric hospitals and children’s hospitals could also use art supplies, toys, and games.  It’s pretty easy to find out how you can do this.  You can call any local hospital and speak to the operator, customer service, or the volunteer office and ask them if they are accepting donations.

How about you? Do you have other ideas on where to donate used clothing and things?