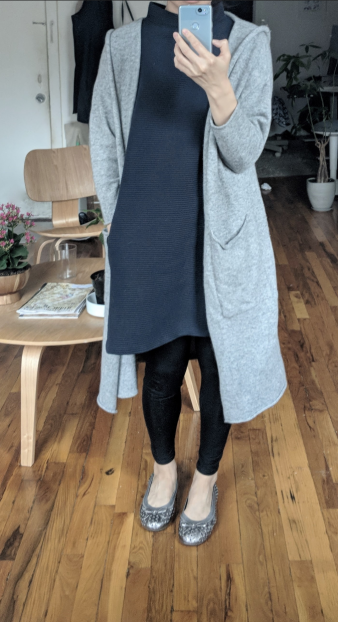 Seems like whenever I’m wearing this “power” dress, I end up having a great day at work.

This is the ottoman fabric dress I bought a couple months back, that’s got great structure and garnered a compliment of “you remind me of Diane Rigg” the first time I wore it to work.  And some of you commented that the dress was a “strong look”.  And I agree.  It’s been dreary and a tad cold in the mornings so I dipped back into my autumn/winter wardrobe and resurrected this thick warm dress for work today.  Something about the structure and the stand up collar makes me feel like a power woman.  It was a nice change because all week I was feeling really stressed with all the uncertainty around my future co-worker leaving at my next job.  I won’t find out more information for a while because the person I’m supposed to talk to is out on vacation.  It’s been tough being in limbo.  But today, things turned around a bit.  At work I got really positive feedback that was entirely unexpected.  It really lifted my spirits and made me feel ever more confident in myself.  Maybe the dress had something to do with it! (j/k).

In other wardrobe news, the dressy-dress finally came!  And I really like it!  What a relief!  It isn’t black after all!  It’s this dark slate gray color that I like even more than black!  I’m so happy with it.  It can’t get any more nondescript but the thing feels amazing and the crepe silk has such a beautiful drape, that graces the body so beautifully.  The dress is actually made of four pieces sewn together, ie. there are two side panels which are almost invisible but function to bring the waist line ever so slightly in.  I think that’s what separates this tank like dress from the millions of other potato sack-like tank dresses out there.  I was fully prepared to wear a potato sack, but I’m glad it isn’t one.  I’m also glad it just barely passes the knees, because that makes it feel a little more dressed up than it would otherwise.

The one downside of this dress: there’s a faint discoloration on the front of the dress, that I think I’ll be able to get out with handwashing.  It’s hardly noticeable, so it’s not an issue that would cause me send it back for a refund.  That’s the thing about stuff from The Real Real.  Seems like they often come with significant flaws that aren’t apparent in the description.  My Marni cashmere cardigan for example came with a pea sized hole on the arm, that I had to repair myself.  I rarely have this problem with buying from Poshmark.

In other non-wardrobe related news: I had my 3rd phone session with my “money coach” last week.  I had cancelled the last two phone sessions because I was delinquent on finishing my budgeting homework.  You see, I have this tendency to want to bury my head in the ground when it comes to financial planning.  But alas, I finished my homework, which was to fill out an excel sheet with information regarding my future income from my future job in California and detailing my expected expenses in Los Angeles.  The excel sheet that my money coach created has formulas built into it so that you don’t have to do the calculations yourself.  If you want a copy of the blank form, send me a private message on my about page, and I’ll email it to you.  I left several spaces blank because I simply didn’t have basic knowledge about how much things would cost.  For example, I didn’t know how much car insurance would cost per month.  I also didn’t know what tax bracket and how much take home pay I’d be getting based on my projected salary.  These were all things my money coach was able to tell me, especially since he is from California and most of his clients are based out of California.  I was so happy to leave all those childcare expense sections blank.  Whew!

After this assignment was done, he now has a sense of how much leftover money I would have at the end of each month to put towards savings/investments.  We will have our final session later this month, where he will help me decide what percentage to save, put into retirement, and invest.  He advised me not to buy disability insurance (which many doctors do buy) because my line of work is not physically demanding, and really only requires me to use my mind more than anything.  Whereas surgeons, cardiologists, dermatologists and many other physician specialties depend heavily manual dexterity and physical health, ie. if a surgeon damaged his hand, he’d be out of his job completely and would not be able to find a job nearly as high paying as that job.  My future job will offer disability insurance that covers situations in which you’d be totally disabled and unable to perform any job, which is what would need to happen for me to not perform my job or some version of my job essentially, so for my specific situation it didn’t really make sense to buy disability.  But for most doctors, I would say it does make sense to buy “own profession” type disability to get coverage for your income.

And speaking of income, with the new revelation that my future co-worker is leaving, which leaves me doing the job of two people, I am exploring how to use this to negotiate a higher salary before officially signing my contract.  I spoke with some of my senior (over age 60) female mentors at my current job and many of them, having regretted not asking for more money in their careers, were very encouraging of me asking for more money, saying things like “You gotta demand more money.  Not ask.  Demand!”, or “Know your worth!  You are a highly trained professional.  Get what you deserve!”.  (Which is true; there are very few psychiatrists in this country with advanced training in treating medically complicated patients; there’s a big shortage of qualified people to do this work as the geriatric population is growing and getting sicker). Some of my female mentors griped about how men in the same position would ask for more money in a heart beat and that I needed to stand up for myself and do the same.  But when I asked them how much more money I should ask for, the answer was less clear.  If I am expected to do the job of two psychiatrists, should I get paid the salary of two psychiatrists?  That seemed like too much to ask for in my opinion.  But, should I get 50% more, 30%, 25% more??  Nobody I spoke to so far has any idea.  There are still some mentors that I could ask for advice, who have been around long enough to know a thing or two about salary negotiations.  I still have a lot of things to figure out….

I thought about writing this in a formal post, but that idea seemed daunting.  I’ve learned that I’m more likely to post if I keep things sort of stream of consciousness and informal.  I don’t ever want this space to start feeling like work even if that means the writing isn’t as good as it could be. But anyway, I thought you guys might be interested in this whole process.  Not enough people talk about it, I think, so I wanted to put it out there.